A Game of Thrones - Based on the best-selling novel series A Song of Ice and Fire by George R. R. Martin, A Game of Thrones: The Board Game Second Edition lets 3-6 players take control of the great houses of Westeros in an epic struggle to claim the Iron Throne.  The updated second edition brings a host of enhancements to your A Game of Thrones experience. It incorporates elements from previous expansions, including ports, garrisons, Wildling cards, and Siege engines, while introducing welcome new innovations. Convenient player screens will hide your underhanded dealings from prying eyes, while new Tides of Battle cards convey the uncertainty of war. This, along with updated graphics and a clarified rule set, means the time has never been better to claim the Iron Throne. $90.00 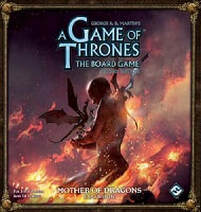 A Game of Thrones: Mother of Dragons - Cross the Narrow Sea with the Mother of Dragons expansion for A Game of Thrones: The Board Game! Clawing their way into power, this expansion includes a side board of the Free Cities of Essos and an overlay of the Eyrie, as well as new characters and mechanics to bring House Targaryen and House Arryn into the fray. As you make your claim to the Iron Throne, you can call other Houses to your cause with the new vassal mechanic, or even ask for aid from the Iron Bank of Braavos. But be cautious, for the Iron Bank will have its due, and if your campaign proves to be a poor investment, the money lenders' retribution will be swift. $60.00