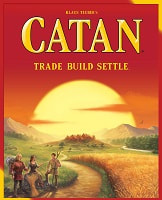 Catan - First published back in 1995, Settlers of Catan is one of the world's most widely known Eurogames. Considered by many to be the gateway game of choice. Catan 5th Edition has hit our shores. 5th Edition is completely compatible with your 4th Edition games. The die lines and die cut remain identical, meaning you could mix and match a 4th Edition copy of Settlers with a 5th Edition of Seafarers without difficulty or compatibility issues. Please understand that the following changes have been made. The boxes have all transitioned from landscape to portrait. The graphics of all covers and tiles and cards were executed by the same artist. The backs of all cards remain the same, the faces of the cards are new art. The tiles have similar perspective to the 4th edition tiles, but the art is new and slightly different, it’s a new artist, the dice remain the same,and  the wood components remain the same colours and supplier. The rules book contains new graphics. The tile size and cut remain the same as the previous 4th edition, since July 2013. $80.00 A 5 & 6 Player Expansion is also available for $50.00. 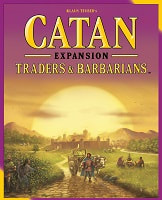 Catan Expansion: Traders & Barbarians - Delve deep into Catan! In Traders and Barbarians you'll find lots of cool new ways to explore Klaus Teuber's award-winning game series. You can now play with just 2 players! Add a harbormaster, a friendly robber, or special events. Play with a wealth of new wooden pieces, board tiles, and capabilities. Even link your games to create an intriguing campaign. Use these 4 variants and 5 scenarios to reinvent your Catan experience. $80.00 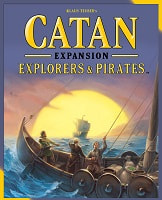 Catan Expansion: Explorers & Pirates - Is the fourth major expansion for The Settlers of Catan (following Seafarers, Cities & Knights and Traders & Barbarians) and it includes five scenarios and three missions; some of the scenarios make use of the missions while others do not. Catan: Explorers & Pirates differs from the Catan base game in three main ways. First, instead of having only a single island in the game on which players build and compete for resources, three islands are present – but the landscape of only one of these islands is known at the start of the game. Players start on this island, then build ships and bring settlers into play so that they can then travel to new lands. When a ship ends its movement on unexplored territory, that hex is revealed and a randomly-drawn number chip placed on it, with the player earning one resource as a reward – assuming the hex produces resources, that is. (The number of unknown tiles varies from 16 to 32, depending on the scenario.) A settler and ship can be transformed into a port settlement, from which roads and new ships can be built to enable further exploration. $95.00 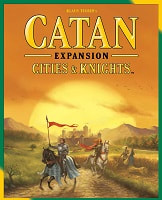 Catan Expansion: Cities & Knights - Flourishing trade brings prosperity to Catan. However, all this wealth also attracts barbarians. The knights of Catan are needed! The expansion can also be combined with "Seafarers" and "Traders & Barbarians. " Requires the Base Game to play. About the game What Is It About? Cities & Knights - The Barbarian Ship Use the hexes of the Catan base game to assemble Catan within the provided frame. Each player has just built a settlement and a city, when dark clouds gather over the peaceful island of Catan. Wild barbarians, attracted by the wealth of Catan, sail toward the island's shores. There is still enough time to prepare for confronting the intruders, though. The strength of the hostile barbarian army always corresponds to the number of cities on Catan. In order to successfully defend Catan, the knights of all players combined must be at least as strong as the barbarian army. Cities & Knights - Regular and Strong Knights Knights are not being used in the form of cards; instead, they are represented by wooden tokens that are placed on free intersections. Each token has an "active" side depicting a black-and-white knight helmet and an "inactive" side depicting a knight helmet in color. A knight can only fight after he is activated; activation costs one grain. After paying said grain, the player turns the knight token over to its active side. Each ring on the token counts as one strength point. If the knights of all players combined have enough strength points to defeat the barbarian army, the danger is averted for the moment. However, if the Catanian knights are too weak, a city will be raided and downgraded to a settlement. This unfortunate event always affects the player who contributed the least amount of knight strength. Besides defending Catan, knights can also be used to chase away the robber or to displace another player's knight. Cities & Knights - Metropolis with a City Wall When the players are not busy defending Catan, they are competing. $80.00 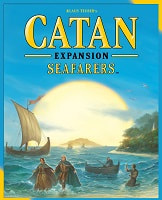 Catan Expansion: Seafarers - In Catan: Seafarers you control a group of bold seafaring settlers exploring and taming the wild, uncharted Isles of Catan. Each game brings you to new seas and new lands. You might even discover the precious gold fields (a very valuable new terrain). Every game is unique and full of fun! Embark on an epic quest to settle the home island, build ships, and chart nearby waters.
Guide your brave seafarers to victory through cunning trades and wise development. Be first to create new sea lanes and settle the newly-discovered isles. The best strategy and a nice dash of luck decide who will be the undisputed ruler of the rich Isles of Catan! A game expansion for 3-4 players. Capture the adventure of seafaring, exploration, and trade. Catan: Seafarers is a 3-4 player expansion for the best-selling Catan board game. Share some fun at sea!  This is not a complete game! Requires the base Settlers of Catan game to play. $80.00 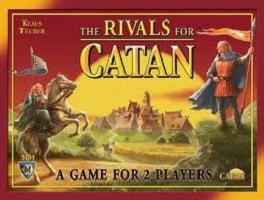 The Rivals for Catan - Each player portrays a prince for Catan, developing their individual provinces and competing to build a more successful province than the other. The basic mode of play is similar to the original Catan Card Game, where players expand their provinces by building settlements connected by roads. Players may also build expansions in their settlements that aid them in various ways, or upgrade their settlements to cities to allow more expansions to be built. They build these additions by using resources that they accumulate each turn, which are determined by the roll of a die. Cards are drawn on each turn to replenish the players' hands. The players may also use action cards that directly affect either their own province or their opponent's province. $40.00. 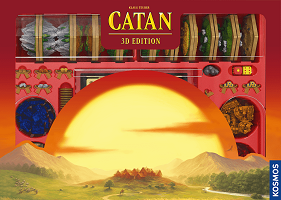 Catan 3D Edition - In CATAN, players try to be the dominant force on the island of Catan by building settlements, cities, and roads. On each turn, dice are rolled to determine what resources — sheep, wheat, wood, brick and ore — the island produces. Players spend these resources to build settlements, roads, and cities and to purchase development cards that have different effects. Each settlement and city you have is worth points, and you can gain additional points by building the longest road, acquiring the largest army, or collecting certain development cards. The first player to collect 10 points wins. In CATAN: 3D Edition, the island of Catan rises off the table for an immersive experience like no other. Your settlements grow from fertile grain fields, and your cities nestle into the sides of majestic mountains. The look of the land is based on terrain tiles hand-sculpted by game designer Klaus Teuber. All of the terrain is hand-painted for stunning color, and the intricately-designed player pieces are antiqued for a look that's full of history and character. $400.00.