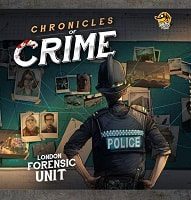 Chronicles of Crime - Is a cooperative game of crime investigation, mixing VR experience and board gaming. With the same physical components (board, locations, characters and items), players will be able to play plenty of different scenario and solve as many different crime stories. They will start the app, choose the scenario they want to play, and follow the story. The goal being to catch the killer of the case they have been given in the shortest short time possible. Using the Scan&Play technology, each component (locations, characters, items, etc.) has a unique QR code, which, depending on the scenario selected, will activate and trigger different clues and stories. That means players will be able to get new stories way after the game is release simply by downloading the app's updates, without any shipping of new physical components involved. The VR experience only requires a mobile phone. Players simply put the VR glasses provided inside the game onto their mobile device, and put the VR glasses on their nose, holding their mobile device in front of their eyes, to immerse themselves in the game's universe and search for clues in a virtual world. $60.00.

Chronicles of Crime: The Millennium Series 1400 - "You are Abelard Lavel, a knight sworn to King Charles VI the Beloved. You live in the city of Paris in a family mansion not far from the famous Notre Dame cathedral. Since you were a child, you had strange, prophetic dreams in which you saw violent scenes of past crimes or even ones yet to be committed. Over time you learned that your unusual gift could be put to good use and you started to solve cases that nobody else could crack. This earned you some reputation in the city and now people seek your help whenever a mysterious crime is committed." The new Chronicles of Crime: 1400 standalone game brings back well-known mechanics while adding some new twists. Now you can deduce not only from the evidence you find or the testimonies given by various characters but also from the mysterious scenes depicted on new Vision Cards. These scenes can be either from the future or from the past and they usually involve characters and objects yet to be revealed. During your investigation, you can also count on your family members to share their knowledge with you. You can ask your uncle, a monk who has a wealth of knowledge about written texts, your sister a merchant who knows something about almost any object you’ll find or even your brother, a king’s spy, who knows a story or two about many of the people you will meet. Finally, your faithful dog is always willing to trace a suspect for you, just bring him an item belonging to the person in question and he’ll track them down! $50.00.