​Dungeons & Dragons - Is the original role-playing game, the game that created a new category of entertainment! Set in a medieval fantasy world of magic and monsters, the game allows you to experience stories and adventures full of endless possibilities and amazing surprises. To play Dungeons & Dragons, you need a Dungeon Master (DM) to present challenges, adjudicate the rules, and narrate the adventure. You also need players to run heroic characters, and adventure (premade or self-created), and special dice.  A character is a player’s interface with the world of D&D. Like the hero of a novel or the star of a movie, the player characters (PCs) are at the centre of the action. However there’s no script to follow, the course of every adventure is determined through the actions the players take, you could be a axe wielding barbarian, to a caring rogue who steals from the rich to give to the poor, there are many types of characters available to play, and in any given situation, all of these characters will act differently.  Unlike many other mediums, D&D gets everyone involved, you could have to plan an extensive extraction of a prisoner, to a diplomatic conversation with a powerful foe, and thus every role-playing experience is different to each other.  Dungeon & Dragons adventures can have fixed objectives, such as kill the dragon, find the treasure, or solve a mystery, or can continue for weeks on end forming a campaign, which your characters play, on a weekly, fortnightly or monthly basis.  Dungeons & Dragons is about coming together as a group and letting your imagination run free, for the possibilities are endless. 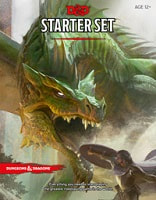 Dungeons & Dragons: Starter Set - Explore subterranean labyrinths! Plunder hoards of Treasure! Battle legendary monsters! The Dungeons and Dragons Starter Set is your gateway to action-packed stories of the imagination. This box contains the essential rules of the game plus everything you need to play heroic characters on perilous adventures in world of fantasy. Ideal for a group of 4 to 6 players, the set includes a 64-page adventure book with everything the Dungeon Master needs to get started, a 32-page rule book for playing characters level one through five, five pre-generated characters, each with a character sheet and supporting reference material and a set of 6 dice. 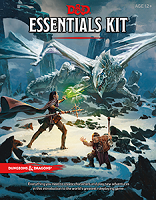 Dungeons & Dragons: Essentials Kit - Dungeons & Dragons is a cooperative storytelling game that harnesses your imagination and invites you to explore a fantastic world of adventure, where heroes battle monsters, find treasures, and overcome quests. The D&D Essentials Kit is a new introductory product meant to bring D&D to audiences interested in jumping into a fantasy story. This box contains the essentials you need to run a D&D game with one Dungeon Master and one to five adventurers. A newly designed rulebook on-boards players by teaching them how to make characters, and the included adventure, Dragon of Icespire Peak, introduces a new 1-on-1 rules variant. ETA 3/9/19. 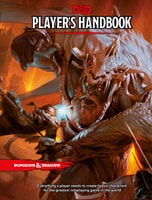 Dungeons & Dragons: Player's Handbook - Everything a player needs to create heroic characters for the world’s greatest role-playing game. The Player’s Handbook is the essential reference for every Dungeons & Dragons role-player. It contains rules for character creation and advancement, backgrounds and skills, exploration and combat, equipment, spells, and much more. Use this book to create exciting characters from among the most iconic D&D races and classes. Dungeons & Dragons immerses you in a world of adventure. Explore ancient ruins and deadly dungeons. Battle monsters while searching for legendary treasures, gain experience and power as you trek across uncharted lands with your companions. The world needs heroes. Will you answer the call? 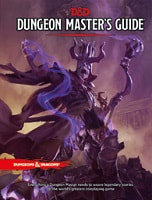 Dungeons & Dragons: Dungeon Master’s Guide - Everything a Dungeon Master needs to weave legendary stories for the world’s greatest role-playing game. The Dungeon Master’s Guide provides the inspiration and the guidance you need to spark your imagination and create worlds of adventure for your players to explore and enjoy. Inside you’ll find world-building tools, tips and tricks for creating memorable dungeons and adventures, optional game rules, hundreds of classic D&D magic items, and much more! 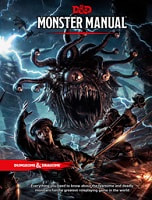 Dungeons & Dragons: Monster Manual  - A menagerie of the most deadliest monsters for the world’s greatest role-playing game, the Monster Manual presents a horde of classic Dungeons & Dragons creatures, including dragons, giants, mind flayers, and beholders, a monstrous feast for Dungeon Masters ready to challenge their players and populate their adventures. The monsters contained herein are culled from the D&D game’s illustrious history, with easy-to-use game statistics and thrilling stories to feed your imagination. 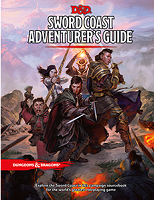 Dungeons & Dragons: Sword Coast Adventurer's Guide - A region of Faerûn that comprises shining paragons of civilization and culture, perilous locales fraught with dread and evil, and encompassing them all, a wilderness that offers every explorer vast opportunity and simultaneously promises great danger. While the Sword Coast Adventurer’s Guide is a valuable resource for Dungeon Masters, it was crafted with players and their characters foremost in mind. There is a plethora of new character options to intrigue and inspire every member of the adventuring party. For use with the fifth edition Player’s Handbook, Monster Manual, and Dungeon Master’s Guide, the Sword Coast Adventurer’s Guide provides the setting, story, and character options needed to participate in a game anywhere along the Sword Coast of the Forgotten Realms. 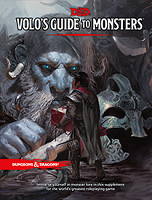 Dungeons  Dragons: Volo's Guide to Monsters - Explore the breadth of D&D’s monsters in this immersive 224-page volume filled with beautiful illustrations and in-depth lore. Volo’s Guide to Monsters provides something exciting for players and Dungeon Masters everywhere! The esteemed loremaster Volothamp Geddarm is back and he’s written a fantastical dissertation, covering some of the most iconic monsters in the Forgotten Realms. Unfortunately, the Sage of Shadowdale himself, Elminster, doesn’t believe Volo gets some of the important details quite right. Don’t miss out as Volo and Elminster square off (academically speaking of course) to illuminate the uninitiated on creatures both common and obscure. Uncover the machinations of the mysterious Kraken Society, what is the origin of the bizarre froghemoth, or how to avoid participating in the ghastly reproductive cycle of the grotesque vargouille. Dungeon Masters and players will get some much-needed guidance as you plan your next venture, traipsing about some dusty old ruin in search of treasure, lore, and let’s not forget ... dangerous creatures whose horns, claws, fangs, heads, or even hides might comfortably adorn the walls of your trophy room. If you survive. 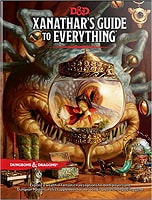 Dungeons & Dragons: Xanathar's Guide to Everything - Explore a wealth of fantastic new rules options for both players and Dungeon Masters in this supplement for the world’s greatest role-playing game. Assembled here for the first time is new information on adventurers of every stripe. In addition, you’ll find valuable advice for those of nefarious intent who must deal with such meddling do-gooders, including the Xanathar’s personal thoughts on how to dispatch anyone foolish enough to interfere with his business dealings. Alongside observations on “heroes” themselves, the beholder fills the pages of this tome with his personal thoughts on tricks, traps, and even treasures and how they can be put to villainous use. Complete rules for more than twenty new subclasses for fifth edition Dungeons & Dragons, including the cavalier, the inquisitive, the horizon walker, and many more. Dozens of new feats and spells, and a system to give your character a unique, randomized backstory. A variety of systems and tools that provide Dungeon Masters new ways to personalize their home games, while also expanding the ways players can engage in organized play and shared world campaigns. 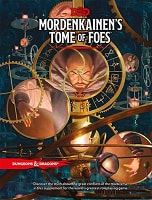 Dungeons & Dragons: Mordenkainen's Tome of Foes - One of the most powerful wizards in the Dungeons & Dragons® multiverse shares some of his hard-won knowledge with fans in a new book full of lore and monsters for D&D fifth edition. Mordenkainen hails from the City of Greyhawk, but over the eons he has expanded his mastery of the major conflicts in the multiverse. Similar to 2016’s Volo’s Guide to Monsters, Mordenkainen’s Tome of Foes not only contains everything you need to run challenging new monsters at the table with your friends but also provides tons storytelling information on some of the most contentious relationships in the multiverse. You’ll learn more about the schism between drow and other elves, githyanki and githserai, and dwarves and duergar, in addition to reading about the incessant Blood War between demons and devils. Players will love to delve into Mordenkainen’s Tome of Foes to search for story hooks to use with their characters, as well as try out some of the player options for races like tieflings and elves, or maybe an otherworldly githyanki or githzerai. Dungeon Masters looking for inspiration and greater challenges for players who have reached higher levels of play will find much to explore in Tome of Foes. 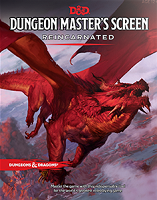 Dungeons & Dragons: Dungeon Master's Scree﻿n Reincarnated - The red dragon Thraxata the Flamefiend and her kobold minions confront a party of intrepid adventurers, who protect their ranger as she attempts to finish the fight by using a legendary arrow of dragon slaying meant specifically for this red wyrm. This durable, four-panel Deluxe Dungeon Master’s Screen, lavishly adorned with illustrations inside and out, will enchant and inspire players and the Dungeon Master. Its landscape design allows the Dungeon Master to easily see beyond and reach over the screen, even as it keeps die rolls and notes hidden from players. Tables inside provide essential support for the three pillars of play–combat, exploration, and interaction. 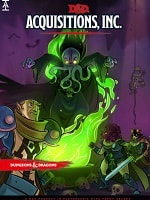 Dungeons & Dragons: Guildmasters' Guide to Ravnica - Explore a worldwide cityscape filled to the brim with adventure and intrigue in this campaign setting for the world’s greatest roleplaying game. A perpetual haze of dreary rain hangs over the spires of Ravnica. Bundled against the weather, the cosmopolitan citizens in all their fantastic diversity go about their daily business in bustling markets and shadowy back alleys. Through it all, ten guilds—crime syndicates, scientific institutions, church hierarchies, military forces, judicial courts, buzzing swarms, and rampaging gangs—vie for power, wealth, and influence. These guilds are the foundation of power on Ravnica. They have existed for millennia, and each one has its own identity and civic function, its own diverse collection of races and creatures, and its own distinct subculture. Their history is a web of wars, intrigue, and political machinations as they have vied for control of the plane 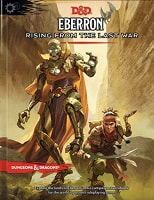 Dungeon & Dragons: Eberron - Rising from the Last War - Explore the lands of Eberron in this campaign source book for the world's greatest role-playing game. This book provides everything Players and Dungeon Masters need to play Dungeons & Dragons in Eberron a war-torn world filled with magic-fueled technology, airships and lightning trains, where noir-inspired mystery meets swashbuckling adventure. Will Eberron enter a prosperous new age or will the shadow of war descend once again? Dive straight into your pulp adventures with easy-to-use locations, complete with maps of floating castles, skyscrapers, and more. Explore Sharn, a city of skyscrapers, airships, and noirish intrigue and a crossroads for the world's war-ravaged peoples. Included a campaign for characters venturing into the Mournland, a mist-cloaked, corpse-littered land twisted by magic. Meld magic and invention to craft objects of wonder as an artificer the first official class to be released for fifth edition D&D since the Player's Handbook. Flesh out your characters with a new D&D game element called a group patron a background for your whole party. Explore 16 new race/subrace options including dragonmarks, which magically transform certain members of the races in the Player's Handbook. Confront horrific monsters born from the world's devastating wars. 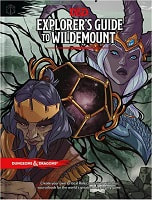