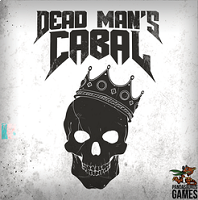 Dead Man's Cabal - You've conquered death and mastered all nine dimensions of space-time. Reality bends to your every whim and desire. You are the absolute best there ever has been, a necromancer at the top of their game. The only downside is that no one likes you on account of the creeping around with dead bodies and the lack of sunlight. But who needs friends when you can make them? Dead Man's Cabal is a mid-weight strategy game from Daniel Newman, with game development from Jonathan Gilmour (Dead of Winter, Dinosaur Island). In the game, 2-4 players compete to bring the dead back to life so that they can throw a party with actual, you know, guests. The game play is a clever interplay of a unique action selection mechanism that allows players to choose both a private action followed by a group action, requiring tense decision-making on the timing of the different phases of the game. Collect bodies, crystal skulls, and runes, then bring the dead back to life. This might sound simple enough, but triggering the actions in just the right order requires careful planning to make sure you aren't helping your competitors more than yourself. $80.00.