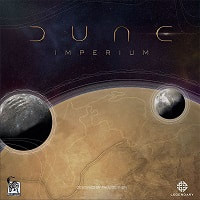 Dune Imperium - Is a game that finds inspiration in elements and characters from the Dune legacy, both the new film from Legendary Pictures and the seminal literary series from Frank Herbert, Brian Herbert, and Kevin J. Anderson. As a leader of one of the Great Houses of the Landsraad, raise your banner and marshal your forces and spies. War is coming, and at the center of the conflict is Arrakis – Dune, the desert planet. Dune: Imperium uses deck-building to add a hidden-information angle to traditional worker placement. You start with a unique leader card, as well as deck identical to those of your opponents. As you acquire cards and build your deck, your choices will define your strengths and weaknesses. Cards allow you to send your Agents to certain spaces on the game board, so how your deck evolves affects your strategy. You might become more powerful militarily, able to deploy more troops than your opponents. Or you might acquire cards that give you an edge with the four political factions represented in the game: the Emperor, the Spacing Guild, the Bene Gesserit, and the Fremen. $80.00. 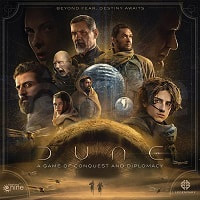 Dune: A game of Conquest and Diplomacy - Take part in one of the most famous science-fiction stories of all time. Dune: A Game of Conquest and Diplomacy builds on 40 years of development, refinement, and evolution from the original classic game. It has the same beloved DNA, flavor, tension, and themes, but with new game-board design, more spice, new streamlined rules, and a new market deck from which you can purchase game advantages. Also, the brand new two-player mode really opens up new gaming opportunities, all making the game more accessible for even the most casual gamer. In Dune, you will take control of one of the four great factions—House Atreides, House Harkonnen, the Fremen, and the Imperium—all vying to control the most valuable resource in the universe: melange, the mysterious spice only found at great cost on the planet Dune. Ship your forces to Dune, harvest spice, seize control of strongholds, and destroy your enemies. Who will control Dune? You decide! $75.00.