Gloomhaven - Is a game of Euro-inspired tactical combat in a persistent world of shifting motives. Players will take on the role of a wandering adventurer with their own special set of skills and their own reasons for travelling to this dark corner of the world. Players must work together out of necessity to clear out menacing dungeons and forgotten ruins. In the process they will enhance their abilities with experience and loot, discover new locations to explore and plunder, and expand an ever-branching story fueled by the decisions they make.  This is a game with a persistent and changing world that is ideally played over many game sessions. After a scenario, players will make decisions on what to do, which will determine how the story continues, kind of like a “Choose Your Own Adventure” book. Playing through a scenario is a cooperative affair where players will fight against automated monsters using an innovative card system to determine the order of play and what a player does on their turn.  Essentially, every turn a player will play two cards out of their hand. Each card has a number at the top, and the number on the first card played will determine their initiative order. Each card also has a top and bottom power, and when it is a player’s turn in the initiative order, they determine whether to use the top power of one card and the bottom power of the other, or vice-versa. Players must be careful, though, because over time they will permanently lose cards from their hands. If they take too long to clear a dungeon, they may end up exhausted and be forced to retreat. $220.00 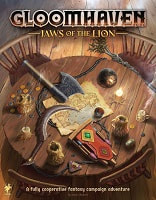 Gloomhaven: Jaws of the Lion - Is a standalone game that takes place before the events of Gloomhaven. The game includes four new characters — Valrath Red Guard (tank, crowd control), Inox Hatchet (ranged damage), Human Voidwarden (support, mind-control), and Quatryl Demolitionist (melee damage, obstacle manipulation) — that can also be used in the original Gloomhaven game. The game also includes 16 monster types (including seven new standard monsters and three new bosses) and a new campaign with 25 scenarios that invites the heroes to investigate a case of mysterious disappearances within the city. Is it the work of Vermlings, or is something far more sinister going on? Gloomhaven: Jaws of the Lion is aimed at a more casual audience to get people into the gameplay more quickly. All of the hard-to-organize cardboard map tiles have been removed, and instead players will play on the scenario book itself, which features new artwork unique to each scenario. The last barrier to entry — i.e., learning the game — has also been lowered through a simplified rule set and a five-scenario tutorial that will ease new players into the experience. $80.00.