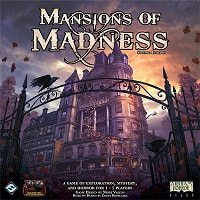 Mansions of Madness (2nd Ed.) - Is a fully cooperative, app-driven board game of horror and mystery for one to five players that takes place in the same universe as Eldrich Horror and Elder Sign. Let the immersive app guide you through the veiled streets of Innsmouth and the haunted corridors of Arkham’s cursed mansions as you search for answers and respite. Eight brave investigators stand ready to confront four scenarios of fear and mystery, collecting weapons, tools, and information, solving complex puzzles, and fighting monsters, insanity, and death. Open the door and step inside these hair-raising Mansions of Madness Second Edition. It will take more than just survival to conquer the evils terrorizing this town. $145.00

​Mansions of Madness: Path of the Serpent - Now in Mansions of Madness, you take on the role of Arkham's bravest investigators who must step into the unexplored wilderness of the Amazon jungle and explore crumbling ruins, discover the secrets of lost civilizations, and stop a serpent's curse before the world descends into chaos. In three new scenarios, you will battle horrifying serpent creatures, face stone monstrosities that come to life, and beat the ever-present danger of being lost to the jungle forever. Four new characters, four new monsters. The scenarios: In The Jungle Awakens - a lavish Arkham garden party shows off the host's recent acquisitions from a South American expedition. Into the Dark - your team of investigators have been hired to assist a South American expedition. Lost Temple of Yig - takes your investigators to ancient stone halls where serpentine priests attempt to reforge their broken bonds with their god, Yig. The new characters: Leo Anderson - able to help his allies cut through the jungle underbrush and allows them to move one space when he performs a move action. Ursula Downs, the explorer. Once per round, she may listen to the call of the unknown and choose to move one space before or after exploring or interacting with a sight token. Daniela Reyes, the mechanic - whenever she or one of her comrades solves a puzzle during an adventure, she may either gain two clues or discard one horror. Norman Withers, Miskatonic Astronomer - May gain two clues or discard one horror once per round, provided he is in an outdoor space where he can read what is written in the stars. $100.00.