​Munchkin - Go down in the dungeon. Kill everything you meet. Back stab your friends and steal their stuff. Grab the treasure and run. Admit it. You love it. Munchkin is the mega-hit card game about dungeon adventure. with none of that stupid role-playing stuff. You and your friends compete to kill monsters and grab magic items. And what magic items! Don the Horny Helmet and the Boots of Butt-Kicking. Wield the Staff of Napalm or maybe the Chainsaw of Bloody Dismemberment. Start by slaughtering the Potted Plant and the Drooling Slime, and work your way up to the Plutonium Dragon.  And it's illustrated (now in full color!) by John Kovalic! Fast-playing and silly, Munchkin can reduce any role-playing group to hysteria. And, while they're laughing, you can steal their stuff.  For 3-6 players. (2 can play, but more is better). Playing time: about an hour. $40.00 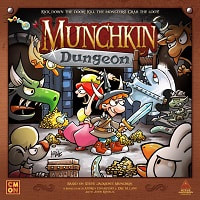 Munchkin Dungeon - In Munchkin Dungeon, players enter a dungeon and attempt to collect the most treasure and achieve the highest character level. They have to push their luck if they want to succeed in their adventure, but if they come across a foe that's a little too big to face, they can always run away. If players choose to take the cowardly (albeit occasionally logical) route of avoiding danger, they earn shame, which will be counted against them at the end of the game. You can't be a hero without exhibiting a little bravery! $95.00.