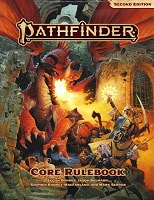 Pathfinder: Second Edition - Core Rulebook - This comprehensive 640-page guide to the Pathfinder roleplaying game provides everything you need to set out on a world of limitless fantasy adventure! Choose from ancestries like elf, human, and goblin and classes like alchemist, fighter, and sorcerer to create a hero of your own design destined to become a legend! Based on more than 20 years of active development and playtest feedback from more than 125,000 gamers, the new Pathfinder rules are easy to learn and exciting to master! This indispensable volume contains all rules for players and Game Masters, and is your first step on a heroic new journey! The Pathfinder Core Rulebook includes: More than 600 pages of game rules, advice, character options, treasure, and more for players and Game Masters! Six heroic player character ancestries, including elf, dwarf, gnome, goblin, halfling, and human, with variant heritages for half-elf and half-orc! More than 30 backgrounds like bartender, soldier, or apprentice to further immerse yourself in your hero’s backstory! Twelve character classes, including the alchemist, barbarian, bard, champion, cleric, druid, fighter, monk, ranger, rogue, sorcerer, and wizard!  Hundreds and hundreds of spells, class feats, and other exciting abilities to help you customize your character to become the hero YOU envision them to be!, and streamlined and revised rules to help ease new players into the game while providing the depth of character options and tactical interest that have defined Pathfinder from the beginning! 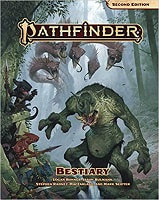 Pathfinder: Second Edition - Bestiary - More than 400 of fantasy’s fiercest foes burst from the pages of this enormous 360-page compendium of the most popular and commonly encountered creatures in the world of Pathfinder! From familiar enemies like orcs, dragons, and vampires to new horrors like the living-nightmare nilith and the three-headed mutoli, to suitable servants for summoners of every alignment, this must-have companion to the Pathfinder Core Rulebook is crawling with creatures perfect for your Pathfinder adventures! The Pathfinder Bestiary includes: More than 400 monsters drawn from mythology, genre classics, and more than a decade of Pathfinder, with plenty of new monsters too! Gorgeous full-color illustrations on nearly every page! Detailed monster lists sorted by level, type, and rarity to help you find the right monster for any situation! Universal monster rules to simplify special attacks, defenses, and qualities like grab, swallow whole, and regeneration. Guidelines for providing appropriate monstrous treasures for any occasion. Detailed lore sidebars offering additional information about Pathfinder’s most popular monstrous friends and foes! 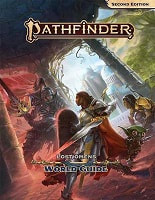 Pathfinder: Second Edition - Lost Omens World Guide - This comprehensive 136-page hardcover overview of the world of Pathfinder provides everything you need to know for a lifetime of adventure in the Age of Lost Omens! The god of prophecy is dead, leaving heroes just like you to carve their own destinies out of an uncertain future! The Lost Omens World Guide is your key to understanding the big picture and your hero’s role within it! A gorgeous two-sided giant poster map of the Pathfinder world provides a beautiful accompaniment to a gazetteer featuring 10 geographically and thematically contiguous regions that combine to create a fantasy world packed with diverse and deadly possibilities! Each region also includes suggested character backgrounds and archetypes to more deeply root your character in their surroundings. Designed for both players and Game Masters, this indispensable guidebook is your first look at the future of the Pathfinder world!