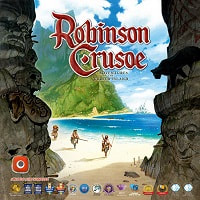 Robinson Crusoe: Adventures on the Cursed Island - Is a game created by Ignacy Trzewiczek, the author of Stronghold. This time Trzewiczek takes the players to a deserted island, where they'll play the parts of shipwreck survivors confronted by an extraordinary adventure. They'll be faced with the challenges of building a shelter, finding food, fighting wild beasts, and protecting themselves from weather changes. Building walls around their homes, animal domestication, constructing weapons and tools from what they find and much more awaits them on the island. The players decide in which direction the game will unfold and – after several in-game weeks of hard work – how their settlement will look. Will they manage to discover the secret of the island in the meantime? Will they find a pirate treasure, or an abandoned village? Will they discover an underground city or a cursed temple at the bottom of a volcano? Answers to these questions lie in hundreds of event cards and hundreds of object and structure cards that can be used during the game... $100.00

Robinson Crusoe: Mystery Tales - Is the second big expansion for Robinson Crusoe: Adventures on the Cursed Island. Unlike its predecessor, it not only includes the campaign (titled The Lost City of Z), where you follow great explorer, Lieutenant Colonel Percy Fawcett, but also a full set of rules and components that can be played with the base game of Robinson Crusoe! Robinson Crusoe: Mystery Tales introduces 10 new characters, the new deck of Event cards, 3 new decks of Adventure cards, new Beast cards, new Mystery cards and the new mechanism of Sanity that you can use in the base game of Robinson Crusoe to change it into a game of dreadful stories! Additionally, the expansion includes five missions that form a long and epic campaign: The Lost City of Z! $75.00.