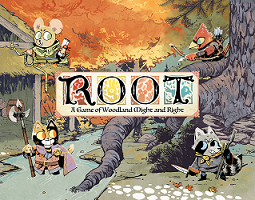 Root - Find adventure in a marvelous asymmetric game. Root provides limitless replay value as you and your friends explore the unique factions all wanting to rule a fantastic forest kingdom. Play as the: Marquise de Cat: Dominate the woods, extracting its riches and policing its inhabitants. Woodland Alliance: Gather supporters and coordinate revolts against the ruling regime. Eyrie Dynasties: Regain control of the woods while keeping your squabbling court at bay. Vagabond: Seek fame and fortune as you forge alliances and rivalries with the other players. Each faction has its own play style and paths to victory, providing an immersive game experience you will want to play again and again. $90.00 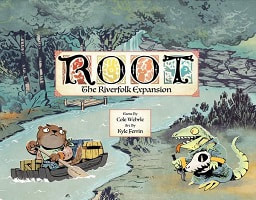 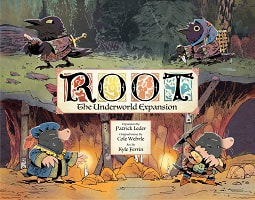 Root: The Underworld Expansion - New factions and battlefields join the world of Root! The Underworld Expansion includes: The Great Underground Duchy: an imperial faction that mixes the flexibility of the Marquise with the escalating Eyrie Dynasties. The Corvid Conspiracy: a secretive faction that hatches plots directly into the hands of their opponents.
Two new maps: dig tunnels on the mountain map or fight to control the ferry on the lake map. $80.00. 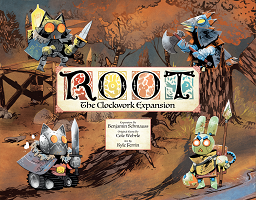 Root: The Clockwork Expansion - Allows players to square off against four fiendishly automated factions. Insert a faction to round out a low-player count game or team up for co-operative play! Compete against the: Mechanical Marquise 2.0 - Dodge her marauding patrols as you try to stop her from completing her building tracks. Electric Eyrie: Shore up the Woodland's defenses against this fearsome invader. If they go unchallenged, the Woodland will soon be flooded with their forces. Automated Alliance - Police these radicals and raze their bases before a little uprising turns into a massive rebellion. Vagabot - Hunt the dastardly Vagabot across the many clearings of the game or attempt to court him with items. $60.00.