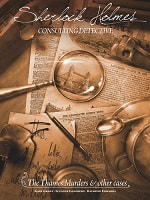 Sherlock Holmes: Consulting Detective: Thames Murders & Other Cases - Have you ever had the desire to walk the streets of Victorian London with Sherlock Holmes in search of Professor Moriarty? To search the docks for the giant rat of Sumatra? To walk up Baker Street as the fog is rolling in and hear Holmes cry out, "Come, Watson, come! The game is afoot!"? Now you can! You can enter the opium den beneath the Bar of Gold, but beware, that may be Colonel Sebastian Moran lurking around the corner. You can capture the mystery and excitement of Holmes' London in this challenging and informative game. You, the player, will match your deductive abilities against your opponents and the master sleuth himself, Sherlock Holmes. In Sherlock Holmes Consulting Detective, you are presented with a mystery to solve, and it is then up to you to trace the threads of evidence through the byways and mansions of nineteenth century London. You will interview suspects, search the newspapers for clues, and put together the facts to reach a solution. Why were two lions murdered in Hyde Park? Who is responsible for the missing paintings from the National Gallery? Who murdered Oswald Mason and why? These are just a few of the cases that will challenge your ingenuity and deductive abilities. This is not a board game: No dice, no luck, but a challenge to your mental ability. The game has been thoroughly researched for Holmesian and Victorian accuracy so as to capture a feeling of that bygone era. $80.00. 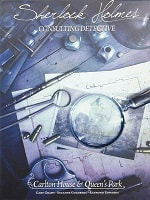 ​Sherlock Holmes: Consulting Detective: Carlton House & Queens Park - Welcome to the Carlton House. Enjoy the luxury and solve the murders! How about a stroll in beautiful Queen's Park? Beware dogs and the occasional crime scene… Return to the streets of Victorian London, but also venture into brand new locations in the latest installment in the Sherlock Holmes Consulting Detective line: Carlton House & Queen's Park! Like the previously released The Thames Murders and Other Cases, Carlton House & Queen's Park introduces ten exciting cases, each one drawing players deep into the world of Sherlock Holmes. Among these cases includes two classic, long out-of-print expansions which are now revised and updated. Whether you're playing solo or with up to eight possible players, you need your wits about you to solve the cases and beat Holmes himself! $80.00.

Sherlock Holmes: Consulting Detective: Jack the Ripper & West End Adventures - Ten more cases to be solved in Sherlock Holmes' Victorian-era London, England. This is a standalone expansion to Sherlock Holmes Consulting Detective with updated graphics. A "London Directory", Map, and Newspaper Archives are included with the cases. Included are six independent "West End Adventures" cases (redesigned and updated from the 1995 expansion), and a series of 4 new cases based on the Jack the Ripper murders. ​$80.00. 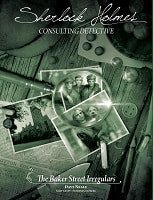 Sherlock Holmes: Consulting Detective: Baker Street Irregulars - In 1880, Sherlock Holmes appointed a group of street children as The Baker Street Irregulars, his unofficial "police force". This is their story, and the story of a particular year that thrusts the Irregulars and the master detective into a series of challenging and dangerous events... Sherlock Holmes Consulting Detective is a cooperative game where the players try to solve mysterious cases by walking the foggy London streets in search of clues. Unravel the thread of intrigue, answer a series of questions, and compare your detective skills to those of the master sleuth himself, Sherlock Holmes. The Baker Street Irregulars is a set of ten new cases, including introductory cases that are perfect for new players, while also offering novel mechanisms and surprises to give seasoned investigators something different. Cases: 1. The Curzon Street Kidnapping 2. The Mudlark Mystery 3. The Three Customers 4. The Promise 5. The Red River Valley 6. The Busker of Bridge Street 7. The Tiger's Eye 8. The Heist in Harp Lane 9. The Dog in the Night Time 10. Death of a Detective $80.00