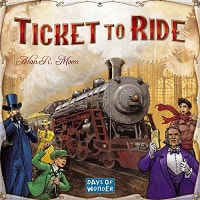 Ticket to Ride - With elegantly simple game play, Ticket to Ride can be learned in under 15 minutes, while providing players with intense strategic and tactical decisions every turn. Players collect cards of various types of train cars they then use to claim railway routes in North America. The longer the routes, the more points they earn. Additional points come to those who fulfill Destination Tickets – goal cards that connect distant cities; and to the player who builds the longest continuous route.  "The rules are simple enough to write on a train ticket – each turn you either draw more cards, claim a route, or get additional Destination Tickets," says Ticket to Ride author, Alan R. Moon. "The tension comes from being forced to balance greed – adding more cards to your hand, and fear – losing a critical route to a competitor."  Ticket to Ride continues in the tradition of Days of Wonder's big format board games featuring high-quality illustrations and components including: an oversize board map of North America, 225 custom-molded train cars, 144 illustrated cards, and wooden scoring markers.  Since its introduction and numerous subsequent awards, Ticket to Ride has become the epitome of a "gateway game" -- simple enough to be taught in a few minutes, and with enough action and tension to keep new players involved and in the game for the duration. $80.00 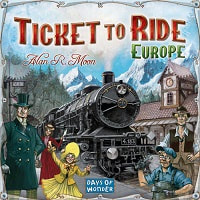 Ticket to Ride: Europe - Takes you on a new train adventure across Europe. From Edinburgh to Constantinople and from Lisbon to Moscow, you'll visit great cities of turn-of-the-century Europe. Like the original Ticket to Ride, the game remains elegantly simple, can be learned in 5 minutes, and appeals to both families and experienced gamers. Ticket to Ride: Europe is a complete, new game and does not require the original version.  More than just a new map, Ticket to Ride: Europe features brand new game play elements. Tunnels may require you to pay extra cards to build on them, Ferries require locomotive cards in order to claim them, and Stations allow you to sacrifice a few points in order to use an opponents route to connect yours. The game also includes larger format cards and Train Station game pieces.  The overall goal remains the same, collect and play train cards in order to place your pieces on the board, attempting to connect cities on your ticket cards. Points are earned both from placing trains and completing tickets but uncompleted tickets lose you points. The player who has the most points at the end of the game wins. $80.00 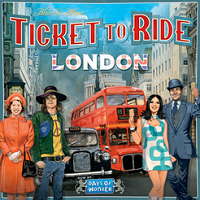 Ticket to Ride: London - Features the familiar gameplay from the Ticket to Ride game series — collect cards, claim routes, draw tickets — but on a scaled-down map of 1970s London that allows you to complete a game in no more than 15 minutes. Each player starts with a supply of 17 double-decker buses, two transportation cards in hand, and one or two destination tickets that show locations in London. On a turn, you either draw two transportation cards from the deck or the display of five face-up cards (or you take one face-up bus, which counts as all six colors in the game); or you claim a route on the board by discarding cards that match the color of the route being claimed (with any set of cards allowing you to claim a gray route); or you draw two destination tickets and keep at least one of them. Players take turns until someone has no more than two buses in their supply, then each player takes one final turn, including the player who triggered the end of the game. Players then sum their points, scoring points for (1) the routes that they've claimed during the game, (2) the destination tickets that they've completed (by connecting the two locations on a ticket by a continuous line of their buses), and (3) the districts that they've connected. (A district consists of 2-4 locations, and you score 1-5 points for a district if you link all of its locations to one another with your buses.) You lose points for any uncompleted destination tickets, then whoever has the high score wins! $40.00.