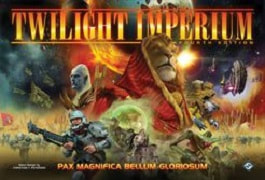 ​Twilight Imperium (4th Ed.) - Is a game of galactic conquest in which three to six players take on the role of one of seventeen factions vying for galactic domination through military might, political maneuvering, and economic bargaining. Every faction offers a completely different play experience, from the wormhole-hopping Ghosts of Creuss to the Emirates of Hacan, masters of trade and economics. These seventeen races are offered many paths to victory, but only one may sit upon the throne of Mecatol Rex as the new masters of the galaxy. No two games of Twilight Imperium are ever identical. At the start of each galactic age, the game a board is uniquely and strategically constructed using 51 galaxy tiles that feature everything from lush new planets and supernovas to asteroid fields and gravity rifts. Players are dealt a hand of these tiles and take turns creating the galaxy around Mecatol Rex, the capital planet seated in the center of the board. An ion storm may block your race from progressing through the galaxy while a fortuitously placed gravity rift may protect you from your closest foes. The galaxy is yours to both craft and dominate. $225.00.