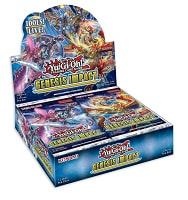 Yu-Gi-Oh!: Genesis Impact - Master three brand-new Deck strategies while keeping your eyes peeled for Collector's Rares in December's new 60-card booster set, Genesis Impact! Aleister, Verre, Endymion... you know their names, but how well do you really know them? Genesis Impact delves deep into the secret history of some of Dueling's most famous Spellcasters! To get the full story you'll need to manage Fusion, Synchro, Xyz, and Link Summoning, all in the same Deck. Finally, flip the script on Ritual Summoning with a new theme that can Ritual Summon nearly every Ritual Monster in the game from your hand or Graveyard by Tributing Machine monsters whose ATK equal or exceed that monster's ATK. The Levels don't have to match at all. Every Effect Monster in the theme is a 2000 ATK Machine, so it's easy to meet the requirements of whatever Ritual Monster you want to Summon. Combine those two monsters' ATK and Ritual Summon the 4000 ATK Ritual Monster to get yourself started!