D&D Baldur's Gate: Descent into Avernus - Features several new Devils and Demons for players to add to their collections. In this infernal collection of miniatures, players will find many of the enemies and allies featured in Descent into Avernus. Battle the most powerful of the legion of devils, the Pit Fiend. Come face to face with demons like the Glabrezu and Merregon. Join forces with fellow adventurers like Reya Dawn. You may even challenge the fallen angel Zariel herself! Collect all 45 figures from Descent into Avernus, the newest set of randomly sorted monsters and characters in our exciting line of D&D miniatures, Icons of the Realms.
D&D Baldur's Gate: Descent into Avernus Standard Boosters each contain four figures total: 1 Large figure and 3 Medium or Small figures.

D&D Waterdeep: Dragon Heist - Includes exciting new player characters & monsters like the Human Warlock of the Fiend & the devilish Pit Fiend. Some of Waterdeep’s most notorious villains make an appearance, including the founder of the Zhentarim, the mysterious Manshoon. This set includes several popular animals for all your Wild Shape needs, such as the tactical Dire Wolf & the vicious Brown Bear. Collect all 44 figures from Waterdeep Dragon Heist, the newest set of randomly sorted monsters and heroes in our exciting line of D&D miniatures, Icons of the Realms. Icons of the Realms: Waterdeep Dragon Heist Standard Boosters each contains four figures total: 1 Large or 1 unique Huge figure and 3 Medium or Small figures. 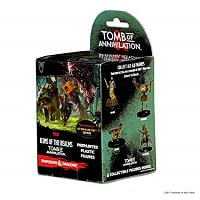 D&D Tomb of Annihilation - Bring the heroes, villains, and monsters from the jungle of Chult, as well as the Tomb of the Nine Gods to life in this latest series of fantasy miniatures! Collect all 44 figures from Tomb of Annihilation, the newest set of randomly sorted monsters and heroes in our exciting line of D&D miniatures, Icons of the Realms. Adventurers have been sent to the jungle peninsula of Chult, where they must face all manner of dangers in order to find the lost city. Adventurers will need all the help they can get to get through the Tomb and the Dungeon’s evil architect - The Lich Acererak.